A big thank you to all the thousands who supported Labour in Cambridge on Thursday, and to our hundreds of active supporters for all your stunning efforts, from leafletting to canvassing to helping out on election day. We won resident support again, building on the election of Daniel Zeichner as our MP in 2015, and the powerful city and MP teamwork ever since, standing up for Cambridge in Westminster and locally. 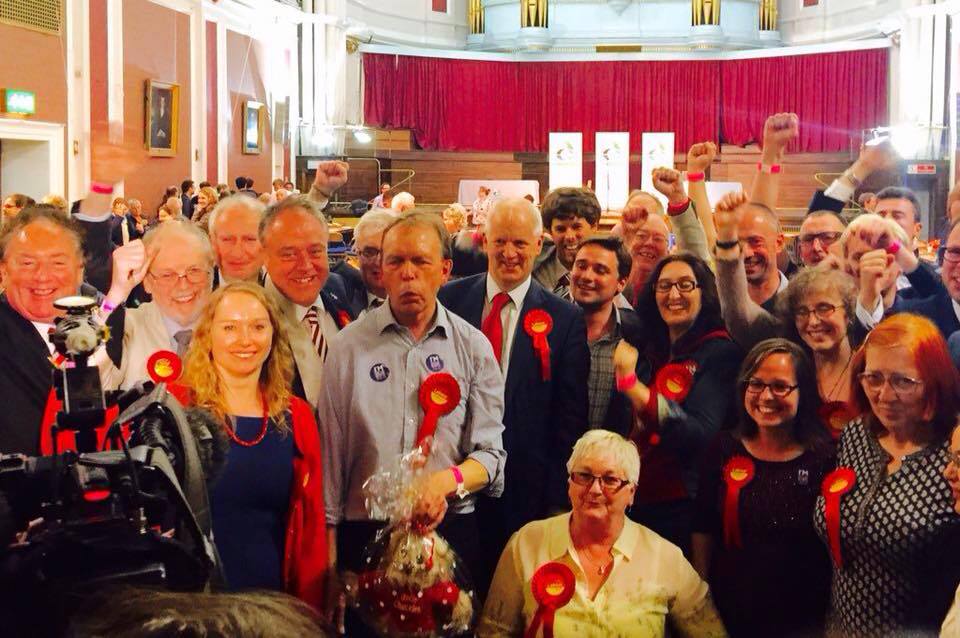 Labour won 46% of the vote on Thursday, on a higher turnout than average for Council elections.
This was as big a vote % as Labour has ever had in the city.

Nine Labour City Councillors were elected, and Labour is the only party campaigning in all 14 city wards.

Local resident Rosy Moore is the new Labour Councillor for Coleridge Ward with 60% of the local vote, replacing George Owers who made a major contribution to Cambridge and Coleridge (thanks George).

But the biggest achievements of the night were two major Labour wins from the Liberal Democrats, increasing our Council majority to 10 (26 Labour Councillors, 13 Lib Dems and 3 others).

1. West Chesterton, where long-time local campaigner Mike Sargeant received 1417 votes, a majority of 260.
The ward hasn’t been won by Labour on the City Council since 1963, and on similar boundaries since 1919.
Mike joins Jocelynne Scutt, Labour’s County Councillor for the same area, in tackling issues for residents.

2. Romsey, where Sophie Barnett won 1409 votes, a majority of 393 over the long serving Councillor Smart.
The Labour team now includes all four city and county Councillors for Romsey.

Full ward by ward details on the election results are at:
http://democracy.cambridge.gov.uk/mgElectionResults.aspx

There was also another election Thursday.

Cambridge voted overwhelmingly for Labour’s Romsey Councillor Dave Baigent as the county’s Police Commissioner and he achieved the best countywide vote Labour ever, at 47% including second preferences.

Coming second was disappointing but that it was an excellent result, including in true blue rural areas of Cambridgeshire.  Labour will keep the pressure up on the new Commissioner to ensure Cambridge gets the policing it needs and that the police tackle domestic violence, sexual exploitation and discrimination crimes.

THANKS TO OUR OTHER STUNNING CANDIDATES

We also want to thank five other amazing but unsuccessful Labour City Council candidates on Thursday who achieved big votes and were still not successful, who have all stood before and who we hope you will see again:

> Danielle Green and her amazing Labour team in Market ward, including for pushing her double stroller down every street in the ward
> Ewan McGaughey in Newnham ward, including for his great videos on local challenges
> Nick Gay who knocked the previous Tory Councillor into third place in Trumpington ward
> Patrick Sheil for doing the same in Castle ward to the Lib Dems in what used to be their city stronghold, and  > John Beresford who achieved a very strong second in Queen Edith’s.

The work restarts for Labour Councillors.  We have big immediate challenges
> to protect your services despite the Government removing all our core funding,
> to win the powers we need to build more local affordable housing for rent,
> to invest in transport and achieve the right plan to tackle damaging peak-time congestion
> to tackle inequality in Cambridge, and increase the role of residents and community groups in our city.

If you have a citywide or local issue that needs sorting out, or you want to volunteer to help Labour, please contact us.

There is a Euro Referendum on 23rd June and Labour needs your votes so Cambridge and the UK stays IN.

And next year, we will be working just as hard to elect Labour Councillors in the four-yearly County Council elections, building on the great team we have now, and on the new ward boundaries expected then.