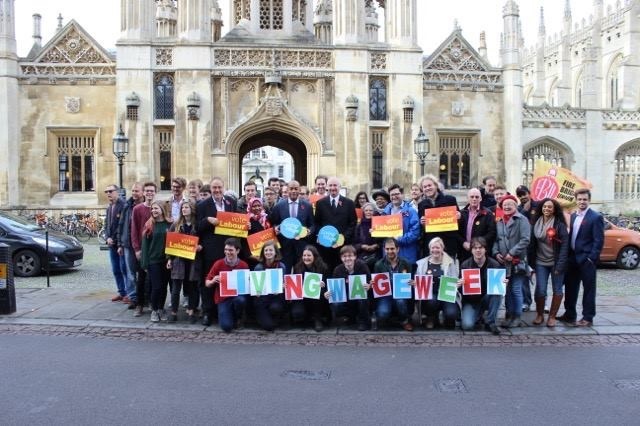 The awards successes were revealed by the Leader of the council, Cllr Lewis Herbert, during a celebratory event at The Guildhall, attended by local Living Wage-accredited employers, to mark the start of Living Wage Week.

At the same event Cllr Herbert told those attending that the new 2016-17 Living Wage rate for the UK (excluding London) will be £8.25 per hour, and gave details of three newly-accredited Living Wage employers in Cambridge -; KH Cleaning & Hygiene Supplies, Cambridge Baby and Outspoken! Deliveries.

The event kicked off a week of events in the city for Living Wage Week, including a free event ‘Making the Living Wage Work for Cambridge Employers’ on Tuesday 3 November at The Trinity Centre on Cambridge Science Park; a campus meeting with speakers at Anglia Ruskin University, and a ‘No Pay Day’ event organised by Cambridge University Students’ Union to highlight the gender pay gap.

The nationwide Living Wage campaign has been promoted in the city by the council since last year, as part of its anti-poverty strategy. Employers choose to pay the Living Wage on a voluntary basis and can then seek accreditation from the Living Wage Foundation. The campaign’s aim is to encourage employers to pay all staff more than the national minimum wage, to reflect the true cost of living.

Cllr Herbert said: “These awards are tremendous news for the council and for Duncan Catchpole.”

“Since becoming accredited as a Living Wage employer in 2014 the council has worked hard to promote the very real benefits to employers and employees of becoming Living Wage-accredited, and we will continue to champion this.”

Cllr George Owers, Executive Councillor for Finance and Resources, said: “In the Cambridge area 32 organisations are now accredited employers, which is encouraging, but 15 per cent of jobs in Cambridge were being paid less than the Living Wage rate in 2014 – so there is still plenty of work to do.

“Cambridge is an expensive city to live and work in -; by paying the Living Wage employers can retain their staff longer, keep them more motivated and improve their organisation’s image with the public. I’d urge any employer in the city to get in touch with the council to find out more about becoming accredited.”

During the last year the council’s Living Wage Coordinator, Theresa Bateman, has contacted more than 700 local organisations, and has held events at the Open University, St John’s Innovation Centre and Cambridge Science Park to promote the Living Wage.

Cambridge Organic Food Co was the first food distributor locally to become accredited as a Living Wage employer in May this year. The company represent organic farms and producers around Cambridge, deliver boxes of organic fruit and vegetables to customers, and supply produce to independent organic, specialist and health food shops in the area.