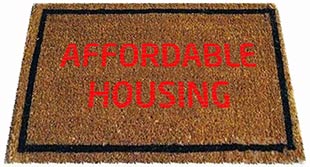 national planning policy by the Conservative Local Government Secretary Eric Pickles will be a disaster for Cambridge.

??The Department for Communities and Local Government announced on 28 November that it would remove the ability of councils to ask for affordable housing contributions on development sites of less than 10 units.

Councillor Price said: “The biggest challenge facing Cambridge is to provide housing to meet the needs of all its residents. We simply cannot do that unless developers pay their fair share to ensure those who cannot afford to buy in Cambridge’s overheated market are not left out in the cold. This diktat from Whitehall won’t mean house prices go down for those buying but simply that developer profits will increase at the cost of those on the housing waiting list.

“It is especially galling because last year the Labour Group managed to ensure that under the draft Local Plan all developments would contribute something. Cambridge is a compact city so small sites play a key role in delivering new homes. Our ?own research has shown that small sites can return the same percentage of profi?t ?to developers as larger sites so size is not an issue?.

“Once again this Liberal Democrat and Tory coalition have turned their back on anyone who cannot afford to buy a home which is rapidly becoming the majority of Cambridge residents. Our efforts to tackle this have been undermined by the huge increase in the Right to Buy discount, reducing the grant for building social homes to its lowest level ever, and preventing us from borrowing enough to invest in building in large numbers ourselves and now by even denying us the ability to negotiate with developers on an even footing. Parts of the Local Plan will now even have to be reworked in the middle of its examination.”