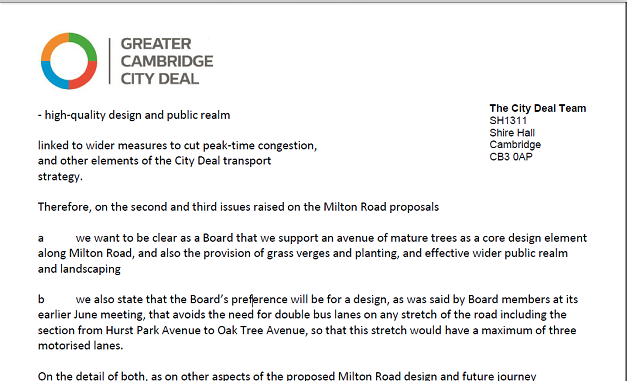 Local Liaison Forum, has said that residents can take heart from the positive response of the City Deal’s Board to recent resolutions put to them by Councillor Scutt.

In a letter sent to Councillor Scutt on on 14 September, the Board’s Chair and Leader of the City Council, Councillor Lewis Herbert, confirmed that independent landscaping, tree and public realm consultants would be appointed by the City Deal to look at the plans for Milton Road and would attend a series of workshops over the next few weeks arranged by Councillor Scutt to be held with residents and council officers.

Councillor Scutt said: “This is an important step forward in achieving a high quality scheme for Milton Road that puts public realm and landscaping right at its heart. I was also very pleased that Councillor Herbert confirmed that the Board will be looking for a design that avoids the needs for double bus lanes on any part of Milton Road.  Our Local Liaison Forum meetings have been very well attended and it’s a testament to the strength of the community across and around Milton Road that we now have these significant commitments.”

Councillor Scutt added: “Residents can take heart from what we have already achieved. Looking forward both the Forum and the workshops will be vital in shaping the preferred design of the Milton Road scheme, including an avenue of mature trees and improving tree provision in some parts where it is currently low.”